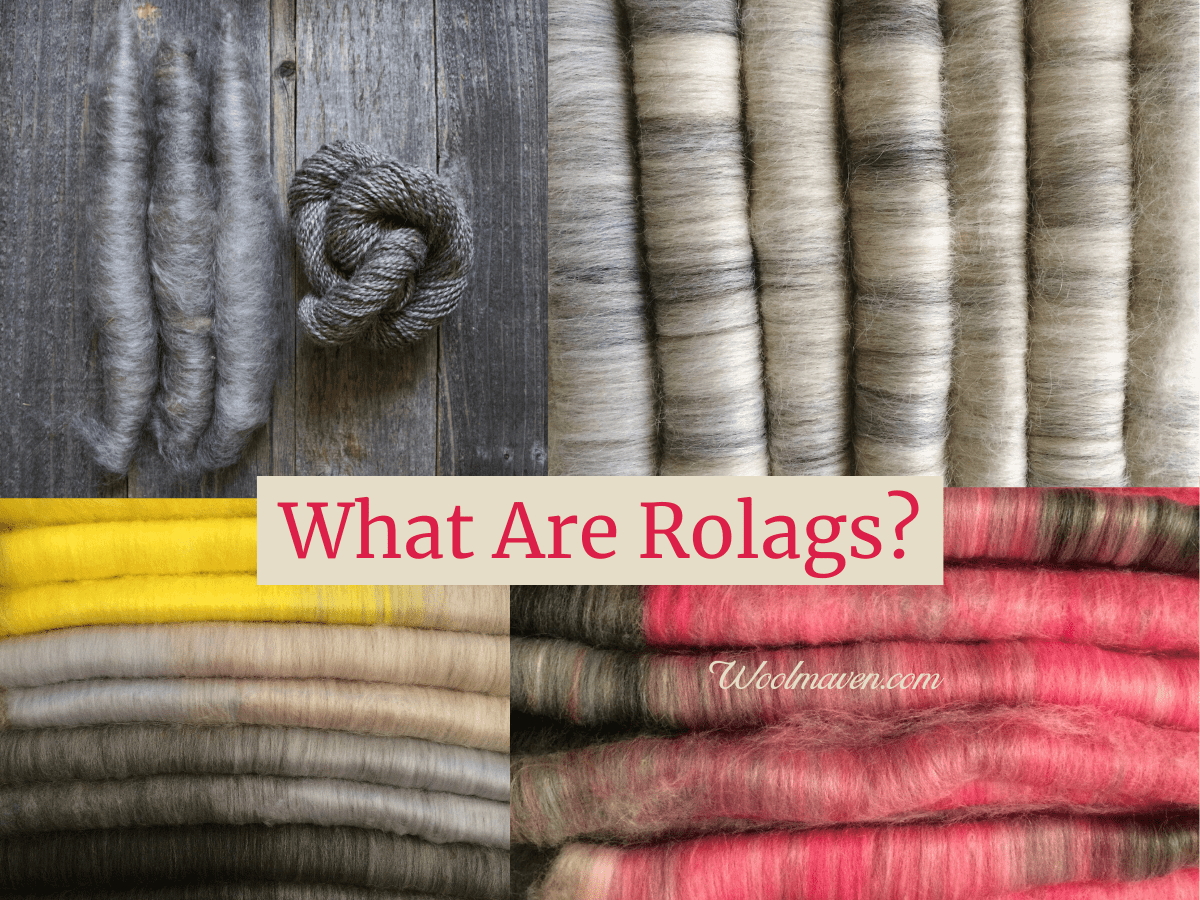 When you are looking for the best way to get your wool ready for handspinning, you’ll surely come across the term rolag. What is a rolag and when would you use them?

A rolag is a fluffy tube of wool that is made for spinning woolen yarns. Rolags are made with hand cards and are used when the handspinner wants to have a lofty fiber source to make a light and airy yarn.

7 Best Places To Get Wool For Handspinning gives you some sources to consider for getting wool to make your rolags!

What is a rolag?

A rolag is a puffy, gently rolled up tube of hand carded wool that is used for spinning woolen style and for making woolen yarn.

Rolags are made by hand, one by one, by using wool and hand carders.

Rolags are usually made with finer fibers, since you are making an insulating yarn that will be soft to the touch.

Rolags arrange the wool fibers in an airy circular swirl so that when you use the rolag to spin yarn, you get fibers running in all different directions in the yarn, keeping it light and fluffy.

The airiness of the rolag spun woolen yarn will keep a maximum amount of air trapped in the fibers of the yarn and since trapped air is insulating, this is what makes woolen spun yarns warm.

Yarn made with rolags will be more airy than yarn made with a batt or some combed top, even if spun as similarly as possible.

What wool or fiber is used to make rolags?

You could, of course, make rolags out of any wool with sufficient crimp. This is your project, after all!

The most common wool used for rolags would be a fine wool, Merino is an obvious choice here.

There are many other fine or medium fine wools that could work just as well, as long as they are pretty low in micron and will make a soft to the touch yarn.

Off the top of my head, I would be willing to try an angora rabbit and Merino blend, Polwarth, a superfine Merino would be lovely, Southdown, Rambouillet, etc.

The good news here is that the wools that are normally something that you would consider soft enough, yet a bit on the short side, could be worked up into rolags and see if this works better for your spinning.

For a great list of breed specific wools and their uses, check out 100+ Sheep Breeds: A Chart For Handspinners, a chart of wool characteristics and uses at FamilyFarmLivestock.com.

How to make rolags

Rolags are made by using hand carders and first carding the fiber, normally wool, but it doesn’t have to be, into a batt then using the hand carders to roll the batt without you having to touch it.

The hand cards that I use are Clemes & Clemes Curved Back Wool Cards. I’ve had them for almost 20 years and use them for all of my hand carding.

When you are well practiced you can make rolags with only the carders. If you are like me, I need to do a bit of cheating to get the rolag to form, that or put in a ton more practice!

How Make Roving With Handcards gives you some tips on working with your hand carders for your fiber prep!

Why handspinners use rolags

As noted above, lofty yarn is warmer and softer, but the fiber used to make the lofty yarn has to be properly prepared to fully take advantage of the potential in woolen spinning.

This is where rolags come in, they are the ideal fiber preparation for woolen spinning.

The next closest option to rolags, as far as a fiber preparation method to give you lofty yarn goes is true roving (not combed top, actual roving).

However, true roving would still have nepps, noils or other imperfections in it, whereas making rolags would give you the opportunity to make sure all that is carded out.

Rolags are easy and quick to make

One of the best things about rolags is that they are pretty quickly put together.

When you are testing out your options with a new to you fiber, carding up a few rolags and giving them a quick test spin, to see if you like the fiber as a woolen spun yarn, is easy.

You will have a bit of a learning curve, but once you “get it” making up a few rolags will be quick.

Make as few or as many rolags as you want

Rolags are made one hand card worth of fiber at a time. You can make 1 or 2 rolags or you can make 10, it doesn’t matter.

How much fiber you have in each rolag, what fiber or fibers you are using and if you are working with a color or fiber blend, this is all customizable!

A few things to keep in mind while customizing your rolags:

Since the point of a rolag is to keep the fiber you are spinning at it’s most airy, you’ll want to use a fiber that is capable of fluffing like you need.

This means that you need a fine fiber that will poof without much weight, think of cotton candy. Fine fibers, like Merino, will fit the bill here.

As always, this is your project, so if you want to make rolags with a medium wool (or anything else for that matter), go for it and see what you get. As a beginner, go with a fine wool.

You’ll want to keep the amount of fiber in the rolags fairly low.

Why? If you pack a bunch of fiber onto your cards, you’ll end up overloading the cards, which will compress the fibers in the rolag.

This is the opposite of what you are trying to do by making rolags in the first place! Rolags are light and airy to keep your woolen yarns light and airy!

Spin with rolags any way you want to

Also, just in case you didn’t think of it, you don’t have to use rolags to spin woolen style!

You could make the rolags, because they are neat and fun, and spin worsted style, giving you a semi woolen or semi worsted yarn.

To me this ability to take what you have and modify it as you go is one of the most beautiful things about handspinning, I’m only limited by my imagination!

If you think a worsted spun yarn made with rolags would be neat, or you just want to try it out to see what you’ll get. I’m not much of a woolen spinner, but I think making rolags is fun anyway!

If you’ve tried your hand at rolags and have decided that they aren’t the thing for you, consider some rolag like alternatives that may be what you are looking for.

These options are making a fauxlag or puni, which are a bit different than rolags, so the results will not be the exactly the same, but similar enough that folks often use them as rolags.

The great news is that either fauxlags or punis can be made using a wider variety of fibers, since they will give you a less extreme result more fiber options are likely to work just fine in either.

A fauxlag is basically a fake rolag that you make when making an authentic rolag will not work out for you.

This could be because you just need more practice or you are going for one of the many in between or creative ways of prepping your fiber for spinning.

To make a fauxlag, you card the wool then take the batt off of the carder and roll it with your hands or against your thigh.

This will give you a fiber tube that is similar, but not as airy as a rolag.

I have to admit, my rolag attempts generally end up actually as fauxlags, since I have to cheat and use my hands to make the fiber roll.

Or, I just take the batt off of the hand card and roll it up in my hands, which works just fine as a rolag substitute.

A puni is a ready to spin fiber that is in a tube shape, but unlike a rolag, it is not meant to be light and airy, it is more about the fiber tube being easy to use for spinning.

A puni is usually made by wrapping a few ends of the carded wool that is still on the carder (hand or drum) around pinched together knitting needles, or something similar.

Once the wool ends are pinched, the puni is made by pulling the fiber off of the card while rolling the pinched needles.

This gives you a compact, neatly rolled tube of fiber once you slide out the pinched needles. Like a fauxlag, a puni is spun from the end of the tube.

The line between puni and fauxlag seems to be blurry, but from what I can tell the main difference is that the puni is more tightly rolled and more dense than a fauxlag. 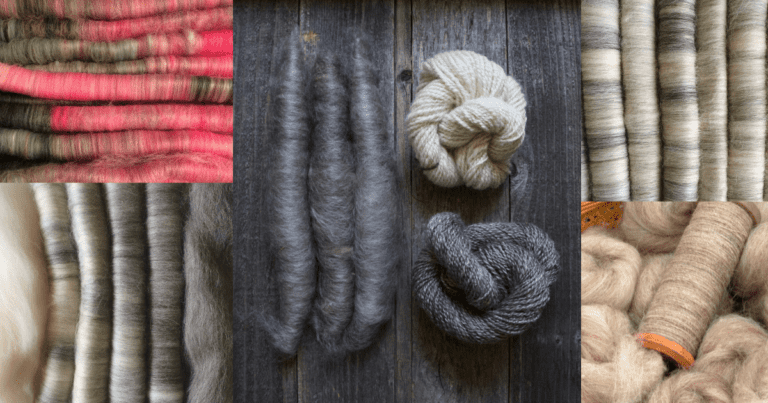 Thinking about using rolags to make your next yarn? You could use undyed wool, for sure, but you probably have a few colors in mind for your project. So, when should you dye? Can you dye rolags or do you need to dye the wool in another way? Do not dye rolags. The dyeing process… 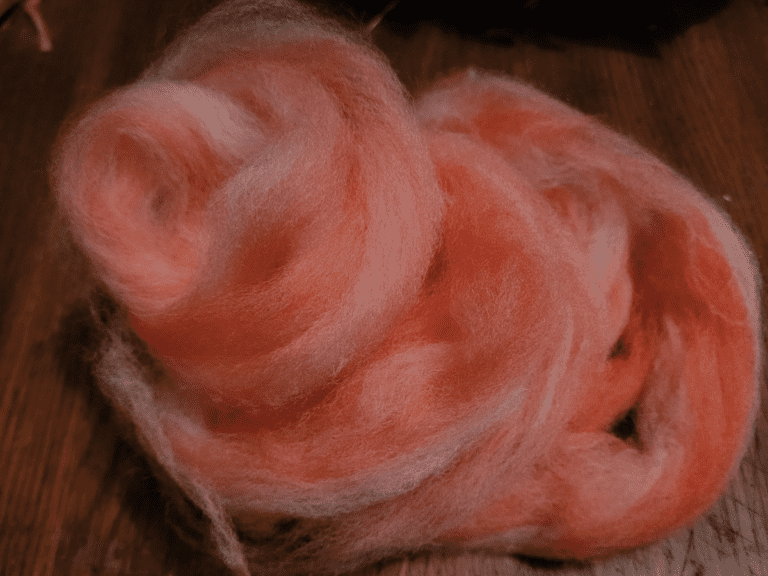 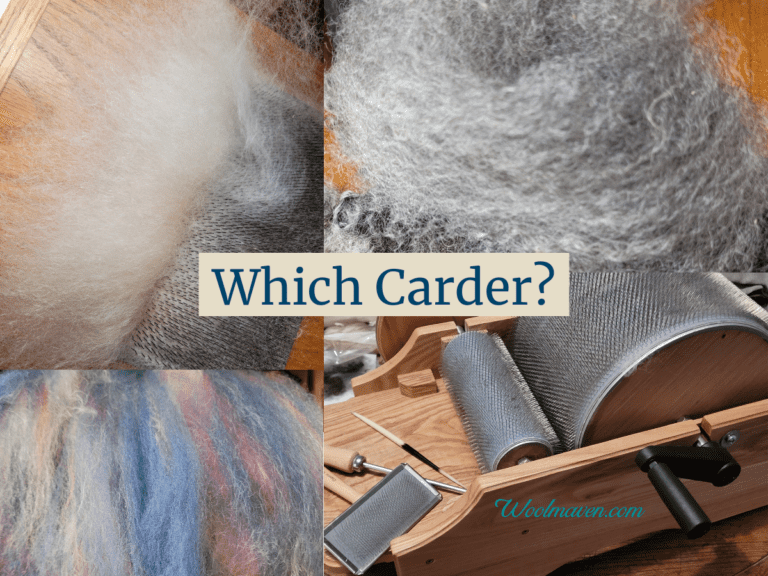 When you decide to jump into preparing your own spinning fiber, you know that you’ll need a carder to use for your wool preparation. Now, you need to pick the one to buy and there are quite a few choices! Which carder do you need and why? Choose a drum carder for higher volume carding,… 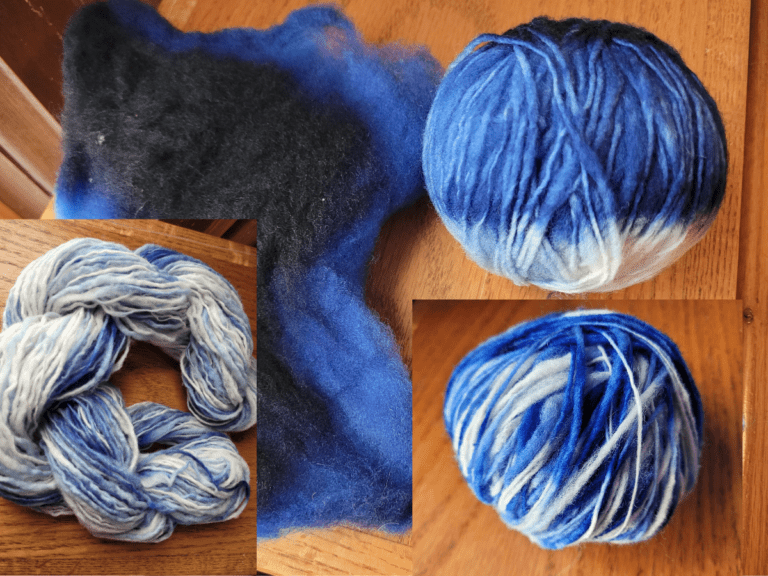 If you dye your wool, you’ll get a huge range of color options and near infinitely increase your options! Who doesn’t want that? Now, the big question is when should you dye the wool, as fleece, yarn or the finished project? Dye wool before spinning if you want to blend colors, dye yarn for patterns… 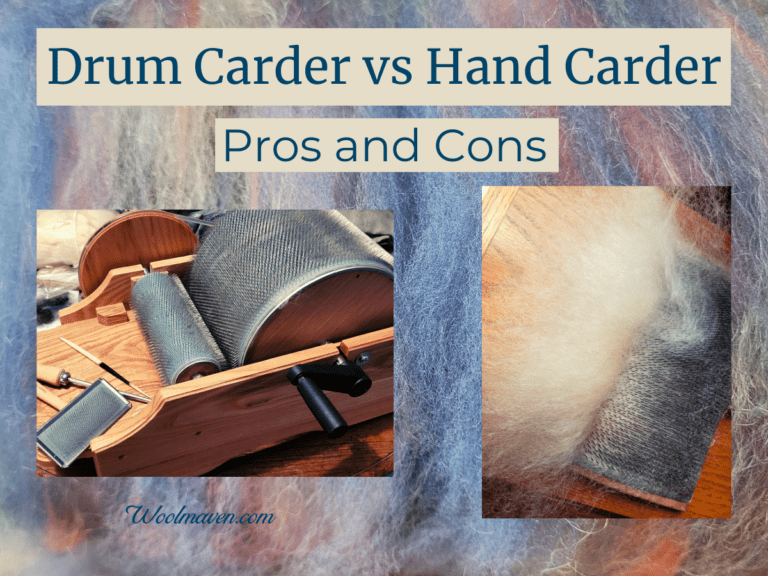 Hand carders or drum carders, which will you get the most use out of for your handspinning projects? Really, that depends upon what you like to spin and how you want to prepare those fibers! So here’s a pros and cons list made from my experiences using both, to help you decide which carder will… 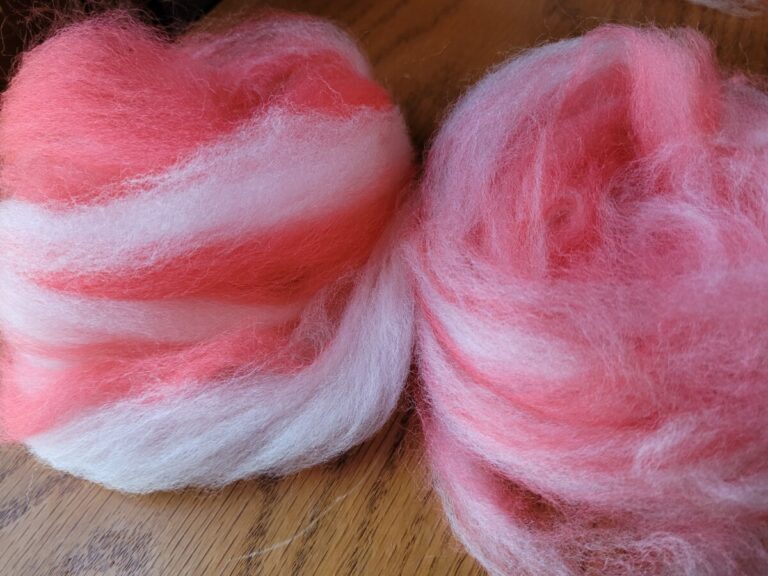 So, you want to make your own wool roving at home? Great idea! Making your own roving is pretty straightforward and definitely doable with just a bit of set up and guidance. Let’s get started! Does Spinning Your Own Yarn Save You Money? goes over the math of buying yarn versus spinning your own. Determine…